Through the nature and variety of architectural challenges presented in church designs, Dimensional Dynamics has achieved an expertise in renovations, adaptive-reuse and new construction.  Over the years DDAP has had the privilege to also include educational and day-care facilities as well as retirement housing, custom homes, commercial architecture, and various mission opportunities to our portfolio; however church facilities remain the mission and focus of this firm.

The following are some examples of these other dimensions of DDAP:

Purchased in the 1970s as a family retreat, Buckhaven Farm saw many renovations and expansions over the years to meet the demands of a growing family.  In 2013, DDAP was delighted to work with the owners to provide a comprehensive solution that would not only clean up

some of the dysfunctional idiosyncrasies created by the various additions, but also to provide a more historic solution to the exterior appearance that would honor the original structure.

The solution used historic photographs of the home to develop window and door details as well as a porch structure that would tie together the numerous additions creating one cohesive style and appearance.  The resultant design created an inviting, unified, functional home that will provide the family with many more years of enjoyment for the next generations to come.

After wrapping up the work from his spring 2011 volunteer project with Engineering Ministries International (eMi), a non-profit humanitarian aids organization, Dimensional Dynamics’ president, John Rosecrans, was once again contacted by an eMi project leader.  This time the need was to replace an architectural volunteer who was not able to participate in a project scheduled for the following month.

John’s desire to serve where he is needed enabled him to schedule a return trip to North Africa in the fall of 2011 to design a state of the art audio/visual recording studio.

The ministry in need offers free Christian programming for the areas satellite TV stations.  However it has been difficult to produce such programming with the current oversights in place.  As such, a privately held recording studio was the solution.  With the program in hand, John was able to sort the design issues into a functional plan that would offer the ministry the ability to grow their facility as finances allow.

John’s continued desire to serve ministries in need of facility solutions go beyond the organized church entity and into all areas of Christian Ministry.

A project leader for Engineering Ministries International (eMi) a non-profit humanitarian world aid organization contacted Dimensional Dynamics’ president, John Rosecrans to ask him if he would be willing to participate in the design for a church expansion project located in North Africa.

Acting as the lead architect, in the spring of 2011 John spent two-weeks designing on location the multi-leveled addition to an existing evangelical church.

It was a great pleasure for John to once again volunteer to work with eMi to meet the needs of this growing church.  He and the team met numerous times with the leaders of the church and its congregation.  Any cultural differences seemed to vanish in an understanding of the ministry needs, and subsequent design solutions.  Together they designed a hope for the future.  He created a functional facility solution that would meet the church’s needs for years to come.

The final result of the trip was not only the presentation packet of schematic design materials the church is now using for fund-raising purposes, but the everlasting relationships and professional experience that for John will be truly hard to beat on his next trip with eMi.

Dimensional Dynamic’s president, John Rosecrans was informed in 2009 of a design competition for the Air Force Village Chapel located in San Antonio,Texas.  Curious about the program and need of this retirement village for a chapel, John entered the competition.  After many late nights remembering his time in design studio, he completed his design based on the planning principles of Dimensional Dynamics.

When approaching the formation of any design concept, two criteria stand above all and create the basis for that concept.  Function and Form, in that order.  If the facility does not function, no matter how pleasant the form, it is useless to the user.  In developing the design concept for the Chapel at the Air Force Village the design rational for the Function and Form of his proposed design was as follows: 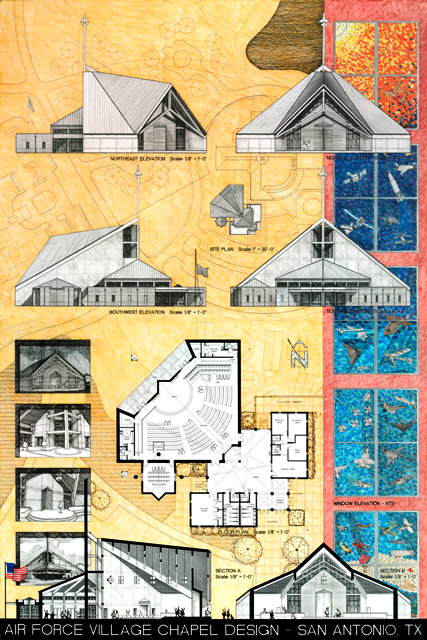 FUNCTION – His functional layout and design was based on the need to design a user-friendly facility for not only the long-term user of the space, but for that first time visitor to the Chapel.  Their visit should be one of ease – peaceful, comfortable and secure as they experience the discovery of each space needed during their stay.  As one enters the Chapel by either the Main or Secondary Entrances, they immediately enter into the central Narthex space.  From here, they are not only able to visually see, but also directly access the program required Administration Suite, Restrooms, Multi-Faith Worship and Sanctuary spaces.

The Narthex acts as the central hub, the heart, the home, the core of this facility.

FORM – Once the basic need for a functional layout was met, John turned to the full design concept and its form.  When considering the design for the Air Force Village Chapel, his childhood as the son of a military man and pilot came into play. Memories such as flying kites, making models of and visiting real planes, military bases, hangers, intersecting angles, speed, power, heights and freedom, came to mind. The core values of the Air Force, “Integrity First, Service before Self, and Excellence in all We Do” were close to his heart as he strove to physically interpret his childhood memories into a clear design solution.  As he looked at the Air Force Symbol, he was delighted to see his functional diagram translate into a working plan, with the Narthex representing the earth, and the Sanctuary and Spire representing flight and the global reach of the Air Force.

Though he did not place in the open competition, John’s time spent on this process reinforced his desire to serve churches in meeting their needs for functional, quality facilities.

In 2006 the firms president, John Rosecrans was approached by Engineering Ministries International (eMi), a non-profit humanitarian aid organization, to be part of their design team for a small church project in Barcenas, Guatemala.  This project was based out of eMi’s Central American office.

The team of volunteers consisted of an architect, structural engineer, MEP engineer, civil engineer and numerous interns.  During the two-week long trip to Guatemala, the team produced a Master Plan design for the small growing church.  The Master plan consisted of a two-story structure, housing the future Sanctuary on the upper level with the Fellowship Hall (initial phase one worship space), Kitchen, Restrooms, and Offices on the main entrance level.

The result of this trip was a design packet of information that the church could use to construct a safe, functional facility, whose construction could be phased to meet their ministry needs and financial ability, a guiding principle that Dimensional Dynamics has held onto since its conception.

Approached by an adjoining neighbor to their corporate headquarters, in 2002 Dimensional Dynamics had the privilege to design an 8,083sf addition to an existing home structure which had been recently converted into commercial office space.

In the design of the new one-story addition with walk-out lower level, DDAP used the slope of the land to work on the client’s behalf.  From the main thoroughfare the new addition creates a majestic two-story presence.  However in an effort to not overwhelm the nearby residential neighbors on the opposite side of the property the existing one-story structure remained.

The function and design of this commercial building allows the client the flexibility for numerous tenants, while offering them the respect and importance that each tenant deserves.

Initially hired in 1997 to provide a site analysis and design study for a possible property acquisition, Dimensional Dynamic prepared a design for a home situated around the stone ruins of a historic barn structure which had stood for eighty years since it had been destroyed by fire.

Maintaining all the existing stone walls and columns, the design met the client’s needs for an open, functional plan that honored and respected the history of the structure while offering them a home to entertain and at the same time provide them with the privacy needed to comfortably live.

Though the acquisition of this property fell through, in 2002 with the purchase of the stone barn at Plumly Farm, DDAP was able to provide the client with a design for the adaptive-reuse of this intact structure to meet their many needs for a growing family.

In an effort to save this historic structure from further neglect and possible demolition, the owners sought Township approval to adapt this mid 19th century carriage house, located in the Village of Unionville Pennsylvania, into a multi-family residence.

In 1999, Dimensional Dynamics was brought in to develop plans creating two high-end apartments within this historic two-story structure.

Upon completion in 2001, this adapted carriage house became one of the village’s most celebrated properties, proving to many residents the importance of Historic Preservation by means of adaptive-reuse.

Requiring additional office space for a new tenant, in 1999 the owner of the Willowdale Town Center hired Dimensional Dynamics to design a 2100 square foot facility that would relate to the context of the adjacent structures.

Though limited by actual space on the site and material options, the final design incorporated elements of the surrounding buildings to provide a welcomed addition to the town center.

Built in the mid 1800s, the dairy barn, located in Willowdale Pennsylvania, found itself the center of a new commercial development.

In 1998, Dimensional Dynamics was hired to create a design to adapt this structure into prime office and retail space.

The innovative solution not only met all the Owner and Tenant’s requirements, but also saved this historic property for future generations.

Hidden for years under wood siding, this historic log structure, thought to be the oldest home in the Village of Marlboro Pennsylvania, was slated for demolition when the owner uncovered its importance.

In an effort to save this structure’s historic integrity, Dimensional Dynamics was hired in 1994 to design the needed expansion and renovation to this home.

Having existing known and unknown architectural elements needing to be designed around, created a wonderful fluid design highlighting the beauty and massing of the original structure.